The import tax on most popular herbicide in Brazil, glyphosate, as well as on its monoisopropylamine salt were reduced from 9.6% to 3.8% for a period of one year, effectively from 5th August, 2022.

The measure was recently approved at an extraordinary meeting of the Executive Management Committee (Gecex) of the Chamber of Foreign Trade (Camex) comprising authorities linked to the Brazilian Ministry of Economy.

In a note, the Ministry of Economy reported that the measure aims to ″address supply problems in certain production chains, with different degrees of severity and significant cost increases in inputs from other chains.″

According to the ministry, the tariff reduction also aims to improve efficiency in the distribution of economic resources, causing potential competitiveness gains for various Brazilian industrial segments.

The products were included in the "List of Exceptions to the Mercosur Common External Tariff" (LETEC), which is an instrument of Mercosur that allows its member countries to apply import tariffs that are different from those agreed in the bloc’s collaboration agreement, bringing together Brazil, Argentina, Uruguay and Paraguay, and including other countries as "associates" and "observers."

The alterations are temporary and exceptional, while always considering relevant connected factors.

Brazil may apply different rates to lower import taxes on up to 100 goods.

In addition to glyphosate, four other types of plastic resin used as industrial inputs were included, which are copolymers of ethylene and alpha-olefin with a density lower than 0.94; unmixed PVC-S resin; propylene copolymer; and PET resin with a viscosity index of 78 ml/g or more.

However, the fungicides, maneb and mancozeb, were removed from the list. 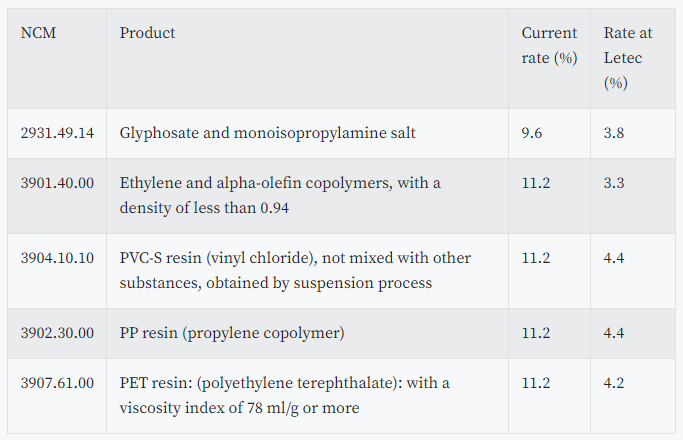