-Above 70% of global Clethodim supplied from China

-Chinese chemical companies appealing to immediate solutions to supply of Ethyl mercaptan, as period of yearly shipment of clethodim draws near, which is mostly in September - October and April - May of the next year

China’s period of shipment of clethodim

It is presently the high time of production of clethodim but all mainstream clethodim manufacturers say that production is not running smoothly, due to the tight supply of the key raw material Ethyl mercaptan which led to clethodim quotation at RMB165,000, though with few deals being made. Surprisingly, the price of Ethyl mercaptan purchased by Chinese manufacturers is nearly 4 times higher than that in India. About Clethodim, so far China has certain industrial chain advantages at Dimethyl malonate and Ethyl Acetoacetate, the other one key intermediate Hydroxylamine hydrochloride China and India all need to import.

As a matter of fact, since September - October last year, the production of clethodim remained problematic, with tight supply and price rise. According to the feedback of mainstream clethodim manufacturers, demand for clethodim from international market has increased in the last two years, but the supply of Ethyl mercaptan, the initial material, has continued to be tight, knowing that the mainstream suppliers are Arkema (factory in US) and CHEVRON PHILLIPS (factory in Europe). According to a market survey, the tension of supply and price surge seem to be a ″precision control″ against China. 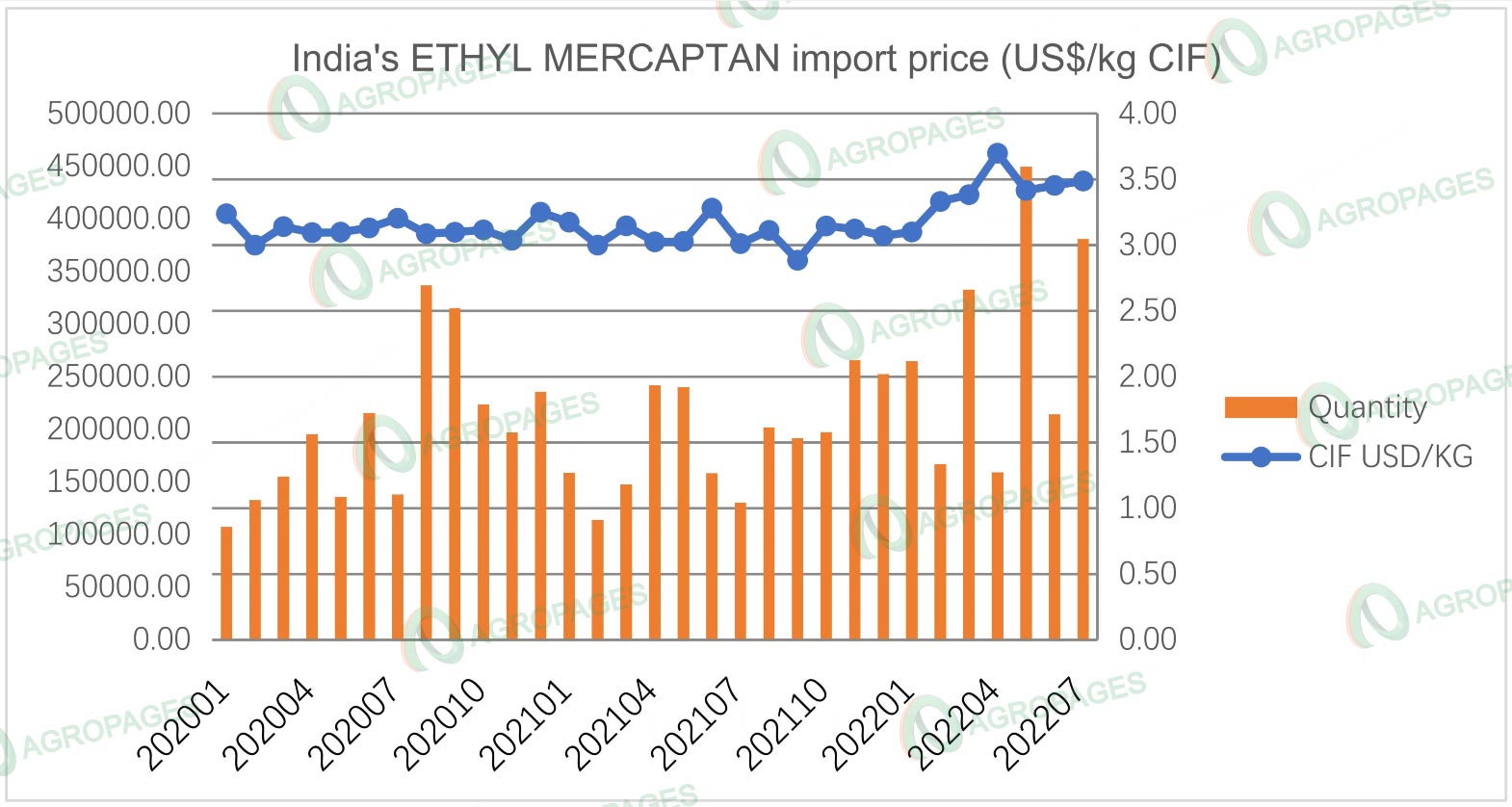 India, pretty much like China, relies on importation, with a relatively stable import volume in recent years, which were 2,387 tons in 2020, 2,300 tons in 2021 and 1,967 tons in January – July 2023. The data show that Ethyl mercaptan was purchased in the peak season from September - November each year. In case that Indian companies did not make advance purchase in the first half of this year, then the total purchases of the product in India in the whole year of 2022 should significantly increase year on year. 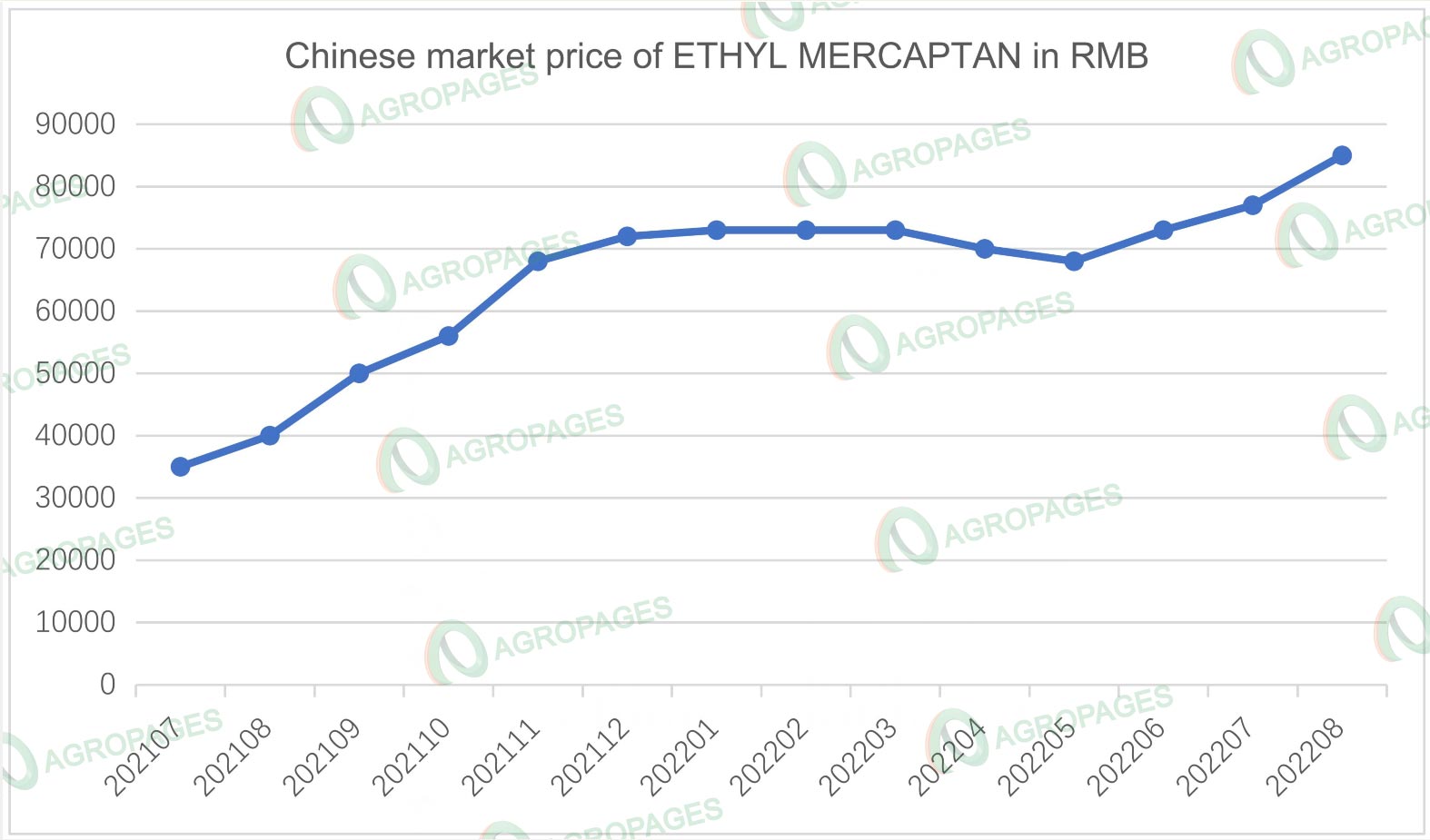 As far as the Ethyl mercaptan purchase price is concerned, India’s purchasing price remains stable between US$3-3.5/kg CIF for years. The price of US$3.41 at the end of August would be only RMB23,400/ton, whilst the purchase price of ETHYL MERCAPTAN of Chinese clethodim manufacturers reached as high as the most surprising price of RMB80,000 /ton. The raw material alone adds at least RMB20,000 to the production cost of the Chinese manufacturers. Yet, the Chinese companies could bear the higher cost and have not significantly raised the price of clethodim. In the past year, clethodim supplied from China still maintained a cost advantage over Indian supply for most of the time, attributable to the benefit of tax rebate. 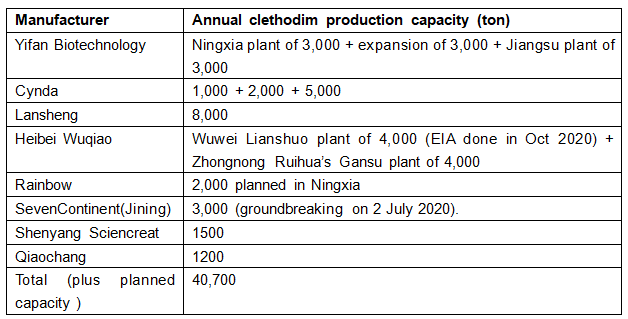 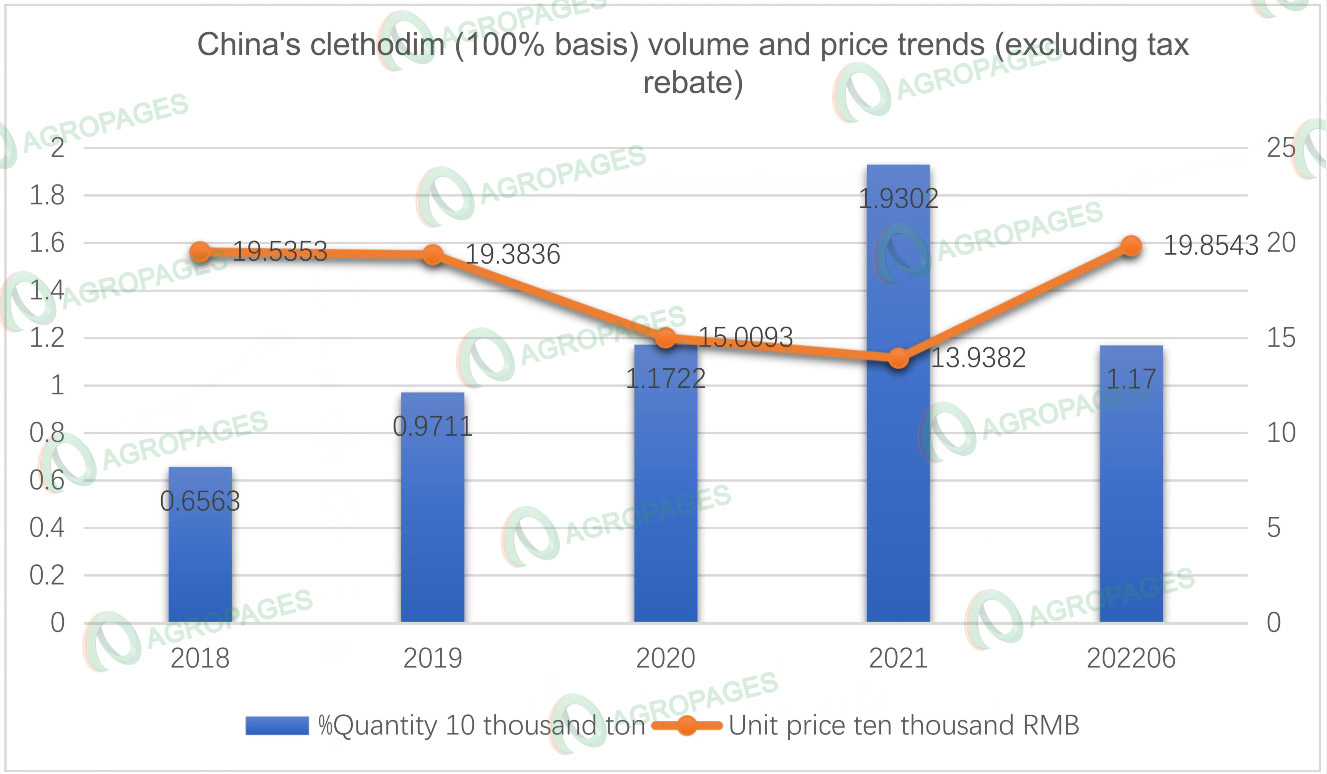 The clethodim production volume in India is relatively stable, with annual volume of less than 7,500 tons (100% basis ), which, however, may increase this year. If China's production can remain normal in the second half of the year, then the global clethodim production is likely to approach 30,000 tons. 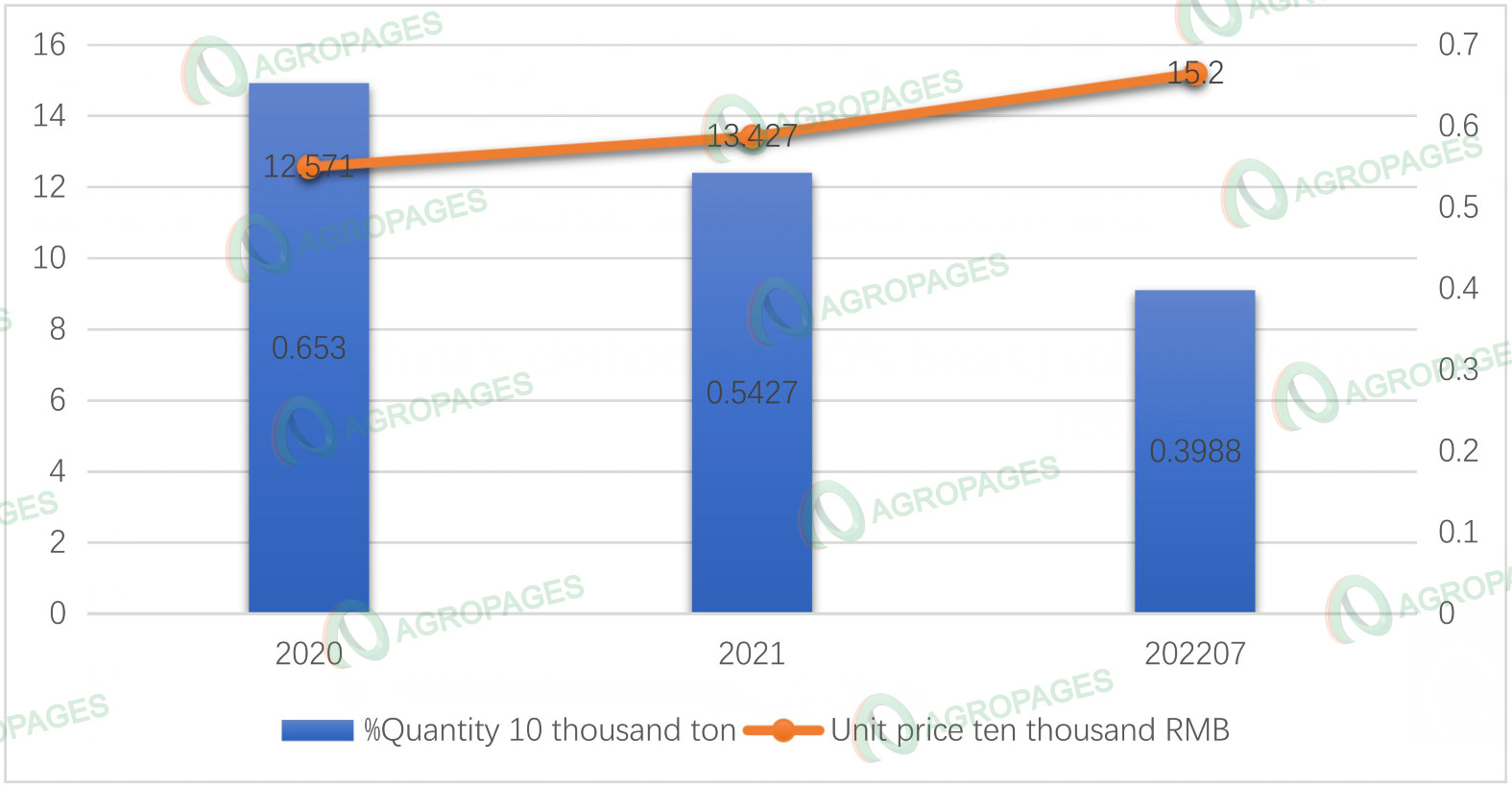 The production of Chinese manufacturers has been affected by a lot of factors such as the tight supply of raw materials & intermediates, sharp increase in price, power curtailment, accidents in industrial parks. Moreover, an explosion occurred in a clethodim plant in India this year. In general, it looks that the production of clethodim is expected to suffer from lots of happenings this year and an immediate suffering is the supply of Ethyl mercaptan, which the clethodim manufacturers are faced with till the end of the year, if the tight supply is not alleviated. At the same time, Chinese chemical companies are called on to take immediate action to increase capacity of Ethyl mercaptan to solve the problem of supply of this raw material under the control of others. 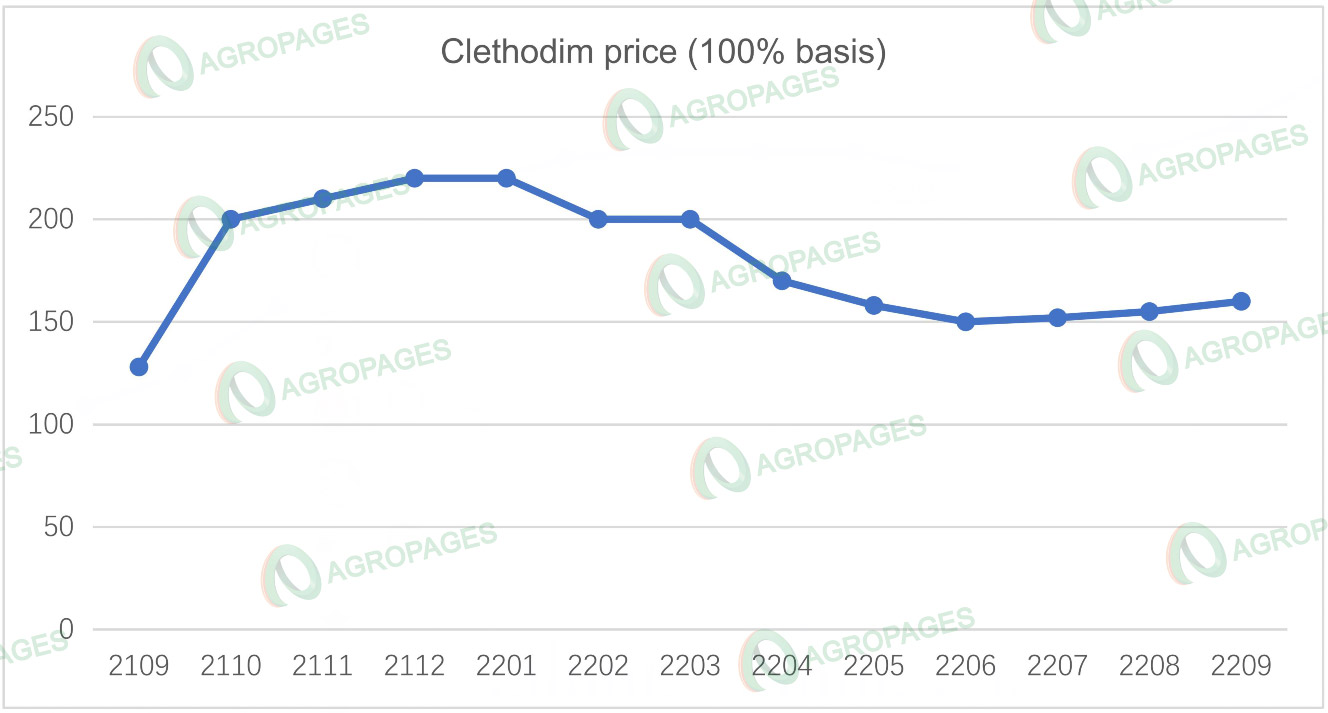 The above is the price curve of clethodim (in RMB1,000), which reveals the short supply and the rising price resulting from the shortage of ETHYL MERCAPTAN.