Rice is one of the most widely distributed crops in the world. Since 2016, the total global rice production has shown an increasing trend year by year. The common weeds in the rice area are mainly barnyardgrass, which has the largest occurrence and damage area, followed by Cyperus difformis L, Monochoria vaginalis, Leptochloa chinensis, and Potamogeton distinctus. In the past 10 years, for the control of weeds in paddy fields, the global research and development of paddy field herbicides has made great progress. At present, the sales of paddy field herbicides account for more than 40% of the rice pesticide market. 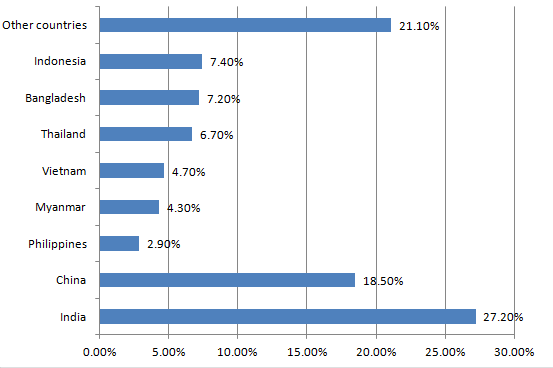 India accounted for 27.2%, ranking first, China ranked second with 18.5%, Indonesia ranked third with 7.4%, and Bangladesh ranked fourth with 7.2%. It is worth mentioning that, as a multi-ethnic archipelago country in Southeast Asia, agriculture is an important part of its economy, accounting for 2.9% of global rice cultivation in 2018, which shows that its agricultural resources are relatively rich. Given the current low price of rice, the total area of rice planted globally will decline.

2. Global overview of herbicide use in rice fields

According to statistics, in 2018, the global paddy field pesticide market sales increased by 7.8% to US$5.972 billion, accounting for 10.4% of the entire pesticide market, and it is the fifth largest crop after fruits and vegetables, grains, soybeans and corn. Growth in pesticide sales was boosted by rising consumption and higher product prices despite relatively flat global acreage. In the past five years, the sales of pesticides in paddy fields have grown rapidly at an average annual rate of 2.7%. The rice herbicide market accounted for 40.3% of the total sales of paddy field pesticides, followed by insecticides with 32.4% and fungicides with 25.4%. The top three sales of herbicides in paddy fields in the world are Cyhalofop-butyl, glyphosate and penoxsulam. In 2018, the acreage in Japan decreased by 0.4%, but the Japanese rice herbicide market increased by 1.4% to US$605 million due to the depreciation of the yen and the increase in product prices. In 2018, China's herbicide market sales increased by 10.0% to US$486 million. Rice weeds in China mainly include barnyardgrass, Bolboschoenus planiculmis, Eleocharis acicularis, and Monochoria korsakowii, etc. The herbicide products include Swep, butachlor, glufosinate-ammonium and glyphosate. At present, the resistance of rice weeds to commonly used herbicides in my country is on the rise. Herbicide usage in India is relatively low, with the herbicide market growing by 10.4% to $212 million in 2018. See Table 1 for the top ten herbicide varieties and markets used in paddy fields.