Over 30 Countries Announced a Ban on Exports! A Global Food Crisis Is Approaching!

According to CCTV news reports, on the evening of May 13, the General Administration of Foreign Trade of India issued a notice stating that the wheat export ban will be implemented immediately, in order to control the rise in commodity prices in the country's domestic market and ensure sufficient domestic food supply. The notice also stated that countries that have requested and obtained authorization from the Indian government to ensure food security needs will be able to continue to receive wheat exports from India. Citing the "Indian Express" report, various varieties of wheat, including durum wheat and common wheat used to make bread, have been moved from "free export" to "export prohibited" categories.

India's wheat exports surged to a record in April after the Russia-Ukraine conflict. However, since March this year, India's high temperature has exacerbated the global wheat supply crisis, and high temperature and drought have continued to threaten India's wheat production. As the world's second-largest wheat producer, India, the ban is tantamount to aggravating the already severe global food crisis.

And just recently, Ukraine issued an emergency order banning the export of grains and other products, including wheat, oats, millet, buckwheat, sugar, salt and meat. The Ukrainian government said that they did this to prevent a humanitarian crisis in the country, to stabilize the market, and to ensure the needs of the country's people for food.

After the ban, India only allowed two types of wheat for export shipments:

1, "on the basis that the Government of India allows other countries to meet their food security needs" and "at the request of the governments of these countries";

2, the export under the transitional arrangement.

The global Food Security Situation Is NOT Optimistic

Wheat prices have soared by about 40% this year, according to Bloomberg News reported by the Financial Associated Press. The price of rice has risen by 16%, and the soaring food price has had a great impact on the food security of various countries. 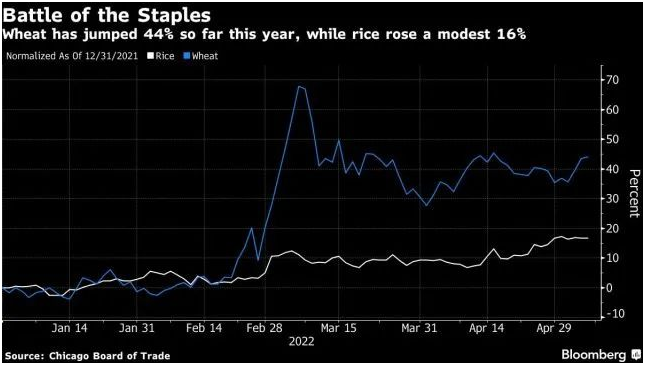 RBI Governor Shaktikanta Das said: "The global shortage of wheat is having an impact.

Some analysts believe that the market is generally too optimistic about the prospect of wheat supply, and the future wheat supply and demand situation may become more severe.

Forecast data released by the U.S. Department of Agriculture (USDA) on Thursday local time showed that global wheat ending stocks for the 2022-2023 marketing year were about 267 million tons, the lowest level in six years, far below analysts’ consensus forecast of 272 million tons.

In addition, the U.S. Department of Agriculture estimates in the report that the global wheat production in 2022-23 will be about 774.8 million tons, and the global consumption is expected to reach 787.5 million tons in the same period, and the demand for wheat will far exceed the supply in the future.

In late February this year, due to the geopolitical crisis, wheat exports from the Black Sea region fell sharply, and global buyers have pinned their hopes on Indian wheat supplies.

The Food and Agriculture Organization of the United Nations has lowered its 2022 global wheat production outlook, saying its forecast for Ukraine remains below average. The situation in Russia and Ukraine could reduce the harvested area by at least 1/5.

In the context of the Russia-Ukraine conflict causing global food supply concerns and pushing up food prices, trade protectionism is on the rise. More than 30 countries including Kazakhstan have promulgated export restrictions on agricultural products such as grains and edible oils to varying degrees.

Beata Javorcik, chief economist at the European Bank for Reconstruction and Development, warned that protectionism would only “artificially” push up prices already at record levels, increasing global food insecurity.

Fan Shenggen, dean of the Global Food Economics and Policy Research Institute of China Agricultural University, told the 21st Century Business Herald reporter that the export restrictions on agricultural products taken by various countries in recent years are aimed at ensuring domestic supply and stabilizing domestic food prices, which also reflects to a certain extent the maintenance of political needs of public opinion.

At the same time, trade protection policies will further raise international grain prices, push up the cost of grain imports in importing countries, and will not be conducive to boosting the enthusiasm of domestic farmers for planting.

Overall, the FAO Food Price Index averaged 158.5 points in April, staying above 130 points for seven consecutive months, up 29.8% year-on-year, and down 0.8% month-on-month from the record high of 159.7 points set in March.

Judging from the impact of the Russian-Ukrainian conflict on global grain trade, low-income countries that rely heavily on the international market are facing greater pressure on food security.

According to the Financial Associated Press, the Food and Agriculture Organization of the United Nations (FAO) released the "2022 Global Food Crisis Report" on May 4, local time, showing that in 2021, about 193 million people in 53 countries or regions will experience food crises or further deterioration of food insecurity, reaching a new record high by increasing nearly 40 million people than that in 2020.

According to the United Nations World Food Program, 276 million people worldwide are already facing severe hunger in early 2022. If the situation in Ukraine continues, the number of hungry people is expected to increase by 47 million.

According to CCTV news, on the 13th local time, German Foreign Minister Berke once again warned of the risk of a possible global food crisis.

She said that because of the regional conflict, 25 million tons of grain are currently stranded in Ukrainian ports, which makes it worse for African and Middle Eastern countries that desperately need grain.

Germany is the rotating presidency of the G7 in 2022. Bell Burke pointed out when attending the G7 foreign ministers meeting that day that the recent global food crisis is just the tip of the iceberg, and as the impact of climate change becomes more pronounced in the summer, the situation will also get worse.

Next: Glyphosate: No Change Proposed To Hazard Classification!