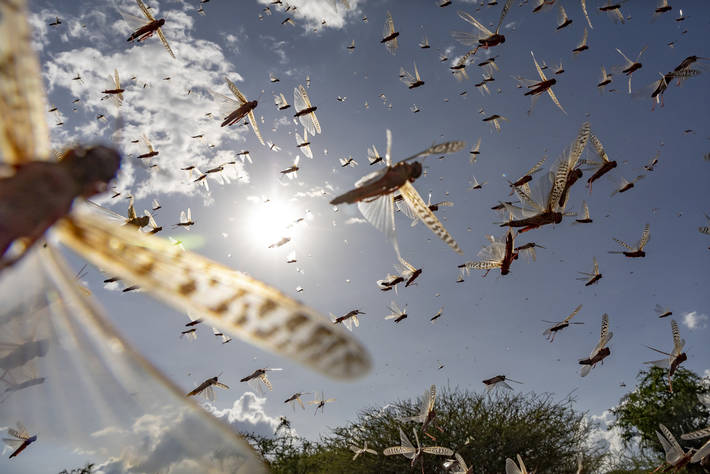 Substantial and widespread breeding continues in eastern Ethiopia and central Somalia. In the past week, there have been increased reports of immature swarms in both countries, which is to be expected as more late instar hopper bands fledge and form new swarms. It is likely that most of the hopper bands have now fledged and formed swarms in central Somalia while numerous hopper bands of all stages are still present in a large part of the eastern Somali region in Ethiopia, roughly about 225 km by 375 km, between the Shabelle River and the border of northern Somalia. Elsewhere in Ethiopia, a mature swarm was reported in the southern Rift Valley between Teltele and the Kenya border, which is likely to be an earlier swarm coming from the north. An immature swarm appeared in northern Afar coming from adjacent areas in Eritrea.In northern Somalia, several swarms have moved to coastal and subcoastal areas in the northwest and northeast where they will lay eggs shortly that will give rise to hopper bands. Breeding has already started on the northern plateau in areas that received good rains from cyclone Gati and hopper bands are forming. Intense ground and aerial control operations continue in Somalia and Ethiopia. Nevertheless, now that immature swarms are forming in central Somalia and eastern Ethiopia, they are expected to be moving south towards southern Somalia and southeast Ethiopia where they could start arriving in northeast Kenya this weekend. This movement is anticipated to increase during the remainder of December and into January.Breeding is underway and will increase along both sides of the Red Sea where control operations are in progress. A few swarms and adult groups are present on the coast of Sudan and in subcoastal areas of the northeast as well as on the Eritrea coast. In Saudi Arabia, adult groups and swarms are maturing and laying eggs on the central and northern coast, and immature swarms are present in the interior. In Yemen, surveys are underway within a limited area on the northern Red Sea coast, and a swarm was seen near Sana’a.Intensive survey and control operations should be maintained in Ethiopia and Somalia, extreme vigilance and preparedness are required in Kenya, and close monitoring should continue along both sides of the Red Sea.


Prev: The Difference Between Acetamiprid and Imidacloprid

Next: China's pesticide imports and exports in August