How to Prevent Stored Grain Infestations

While fulfilling the food demand of an increasing population remains a major global concern, more than one-third of food is lost or wasted in postharvest operations based on the study of National Center for Biotechnology Information (NCBI) of the United States. Reducing the postharvest losses, especially in developing countries, could be a sustainable solution to increase food availability, reduce pressure on natural resources, eliminate hunger and improve farmers’ livelihoods. Cereal grains are the basis of staple food in most of the developing nations, and account for the maximum postharvest losses on a calorific basis among all agricultural commodities. As much as 50%–60% cereal grains can be lost during the storage stage due only to the lack of technical inefficiency. Use of scientific storage methods can reduce these losses to as low as 1%–2%.

Among all the biotic factors causing postharvest losses, insect pests are considered most important and cause huge losses in the grains (30%–40%). As grain harvest is underway, it is important to ensure that grain bins are prepared in the best possible manner to prevent insect infestations. There are several species of insects that feed on stored grain. Both the larval and adult stages of stored grain beetles are capable of causing damage to grain. They will consume grain dusts, cracked kernels, and other grain debris. Below are the common stored grain pests: saw toothed grain beetle (Oryzaephilus surinamensis), rice weevil (Sitophilus oryzae), maize weevil (Sitophilus zeamais), lesser grain borer (Rhyzopertha dominica), red flour beetle (Tribolium castaneum), angoumois grain moth (Sitotroga cerealella).

Stored grains protection requires the use of various methods to ensure that the quality of the grain entering the storage facility does not deteriorate over time. Relatively a great many of insecticides are currently labeled for use in or on stored grain, of course, insecticides are one option in an arsenal of strategies used to protect our stored commodities. In addition, the following measures should not be ignored in a complete program: 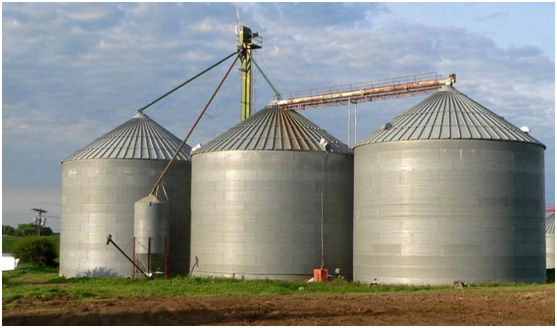 c) The top of the grain mass (top-dress treatment) 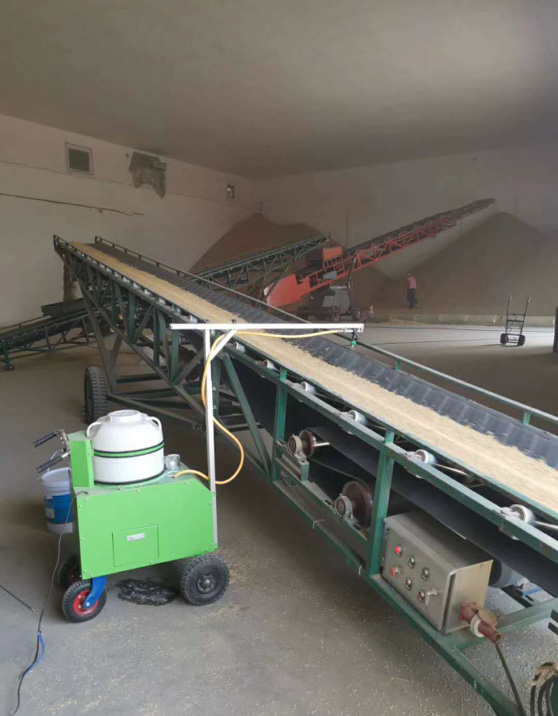 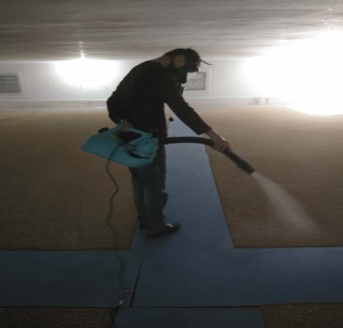 If insects are found in the post-binning, fumigation is suggested. Our product King's ALP, a type of burrow fumigant that      release toxic phosphene gas (PH3) in the presence of moisture. As a international acceptance as a residue-free treatment, the goal of fumigation is to maintain a toxic concentration of gas long enough to kill the target pest population. The toxic gases penetrate into cracks, crevices, the commodity, and the facility treated.

King's ALP provide high penetration and can reach anywhere the insect hiding. It can kill all stages of target insects (egg, larva, pupa and adult). Follow label instructions carefully when grain treatment. It is a restricted-use-pesticide that should be conducted only by trained, experienced, registered applicators. When determining how much KING’S ALP is needed, it is important to treat the entire storage volume, regardless of how much grain is contained inside. 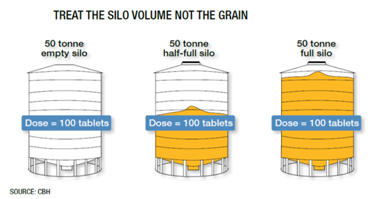 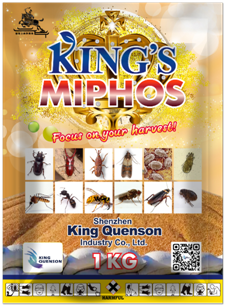 As a protectant of grain, our another new product King's MIPHOS, is effective against a broad spectrum of stored grain pests, should be added to the grain when the bin is being filled to guard against insect damage.

King's MIPHOS may also be added to the upper surface of the grain in the bin (top dressing) to protect against damage from moths and other insects entering the top of the storage facility.

In order to achieve the best control effect, KING’S MIPHOS should be thoroughly mixed with the grains with a depth of 50cm on the surface layer after the powder spray or broadcast application, to form an effective insect-proof barrier.

We recommend the product assortment of KING’S MIPHOS and KING’S ALP.

For the bulk grain in the warehouse, first, broadcast KING’S MIPHOS evenly on the grain surface, then mix it thoroughly to the grain 50cm depth on the surface layer, and then airtight the entire warehouse and use KING'S ALP fumigation to kill the insects in the grain completely. After ventilation, the grain can be stored properly.

In this way, there will be no insects in the grain pile after fumigation of KING’S ALP, and foreign insects will not be able to invade the grain pile through the grain surface mixed with KING’S MIPHOS. 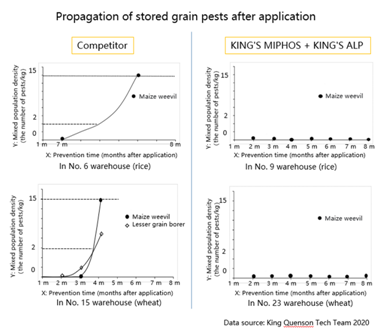 According to the test result of China Grain Reserves, the combined application of KING’S MIPHOS + KING'S ALP can significantly inhibit the occurrence of storage insects for at least 8 months, and at the same time, repeated fumigation can be avoided.

If you have a need, you can contact us at any time: